International African Penguin Awareness Day is October 10, and the African penguin keepers at Water’s Edge: Africa have a special social media celebration in the works. On our Facebook and YouTube channels, Cheyenne Mountain Zoo will share a video about our flock of 16 African penguins, who serve as animal ambassadors for their wild counterparts. 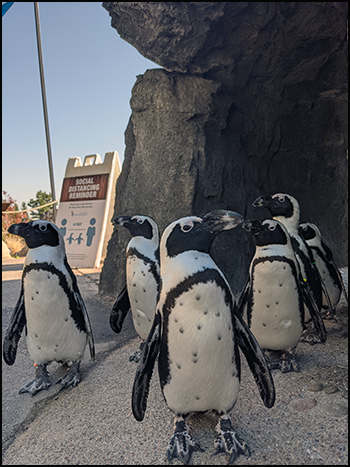 “Our flock does an incredible job helping our guests form lasting connections with them and their species,” said Mandy Hester, keeper in Water’s Edge. “The exhibit really sets them up by removing as many physical barriers as possible.”

The flock is getting even more confident sharing space with our guests. Penguin beach, at Water’s Edge, is designed so penguins can walk right up to guests. Hester says the best way for guests to get that experience is to be in the right place at the right time, and to remember that penguins investigate things with their beaks – since they don’t have hands to feel things with.

“We’re encouraging guests to let the penguins approach them instead of approaching the penguins, and to avoid kneeling down – as tempting as that is to get face-to-face,” said Hester. “The penguins like shiny things and anything they can feel with their beaks, so keepers on the beach will sometimes give toys to guests that they can offer to the penguins. It’s been really fun watching these little guys make our guests fall in love with them.”

When guests enter penguin beach while the penguins are outside, a keeper is present to help guests learn how to best interact with them. Making sure penguins have space and have the opportunity to approach guests, we’ve seen that they most often will.

“When they waddle down on the path together, they’re so funny and curious,” said Hester. “If there’s a moth or something flying around, they’ll get really interested in that and follow it around for a while and then they lose interest and move on to something else.”

Keepers provide all kinds of enrichment to keep them stimulated, like wind chimes that shimmer. One guest that bought a bubble maker in our gift shop was playing with it on the path and the penguins loved it, so keepers bought some bubbles for them. That’s another favorite form of enrichment for the flock.

The penguins also like to investigate what treasures guests might have. They like to dig around in the underneath cargo areas of strollers if guests are comfortable with that and there’s nothing dangerous for them.

“Things that babies like, penguins like,” said Hester. “A stroller or diaper bag is a treasure trove. The guests who have interacted with them on penguin beach have formed those meaningful relationships with our penguins that we work so hard to foster. We’ve also seen them standing in line to the limited-capacity indoor penguin building with guests, which is just adorable.” 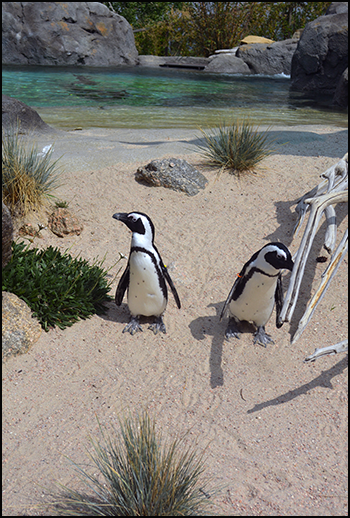 “We have a couple of breeding recommendations in our flock,” said Hester. “One is a pair that most recently joined the flock, but have successfully had chicks before. Ichaboe [ick’-a-boh], a 15-year-old male is one of my favorites. He’s huge. He was the largest chick on record when he was born at his previous facility. When penguins first arrive at CMZoo, they have to earn the respect of the flock. The flock members would try to push him into the pool, but he is so big and solid, he’d just stand there and they couldn’t move him. His mate is Spheniscus [sphah-nesk-us], a 14-year-old female. They’re both really confident. They are already bonded, so we have high hopes for them bringing another chick to the world.”

African penguins are endangered, so zoos accredited by the Association of Zoos and Aquariums work to maintain the species’ viability through a Species Survival Plan, which matches penguins to breed based on genetics. That doesn’t always mean the individuals – whether they’re recommended to breed or not – are always interested in their selected mates.

“Captain is recommended with Percy, Pearl or Roxy, but he’s bonded with Darby,” said Hester. “Biggs and Roxy were bonded and lived together before moving here, but they are not recommended for breeding. While Roxy was back in Toledo, finishing her yearly molt, Biggs came to CMZoo and bonded with Percy, but they are not recommended either. When Roxy arrived, Biggs and she bonded again, but Biggs was already bonding with Percy, so we saw Biggs spending time in both Percy and Roxy’s nest boxes. Then Biggs picked Percy, and Roxy bonded with Rico. Rico used to be bonded with Napoleon, but they lost interest in each other and now Napoleon likes Pearl, but Pearl doesn’t seem to feel the same way. Rufaro, who came with his parents, Safara and Alex, and his brother, Rudo, has bonded with Pamona, who came by herself. We track all of this, but don’t expect everyone to keep up. It’s like a reality TV show.”

There are no scheduled times that the penguins explore the areas they can share with guests, so it’s a special experience that occurs several times a day. Next time you’re at CMZoo, swing by and say hello to our penguin flock at Water’s Edge: Africa.