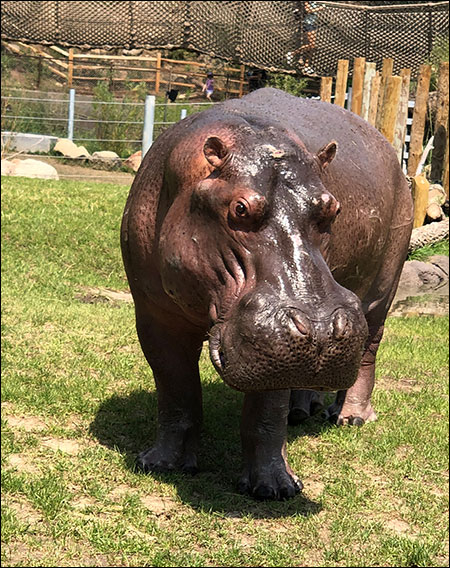 Biko (BEE-koh), a 17-year-old male Nile hippopotamus who joined us at the end of June, is quickly winning over the hearts of humans and hippos alike. In just a couple of months, he has learned to navigate his new home, met CMZoo’s hippos sisters, Zambezi and Kasai, warmed up to his keepers, and started engaging with guests.

“He was initially pretty cautious around people, because Water’s Edge: Africa was designed to bring guests and animals as close as safely possible, and that was somewhat new for him,” said Al Carrier, keeper at Water’s Edge: Africa. “We’ve been taking our time and making sure he’s comfortable. We make sure he knows he can choose to walk away at any time and that he’s going to get rewards for interacting with people. He’s progressed really quickly, and he’s been coming up to guests in our demo areas and opening his mouth, which is always impressive. He loves to be sprayed in his mouth with a hose. That’s fun because we can get guests involved, too. We’re so proud of him. He’s doing great.”

Biko came to CMZoo on a breeding recommendation from the Association of Zoos and Aquariums’ (AZA) Nile Hippopotamus Species Survival Plan. His genetics are compatible with 27-year-old Zambezi and 20-year-old Kasai, who are sisters. The Water’s Edge animal care team has started introductions, and things are going really well for Biko and Zambezi so far. Right now, they only spend time together when they’re supervised.

“He’s very curious about the girls,” said Carrier. “He’s a perfect gentleman and takes his time walking up to them during introductions. We have seen on our overnight surveillance footage that when they’re separated, he prefers to sleep right up against the fence next to them, and it’s usually Zambezi on the other side.”

Animal introductions, especially with large and potentially territorial animals like hippos, require patience and a lot of observation. The team started the process as most animal introductions start at CMZoo: with a ‘howdy,’ which is an opportunity for the hippos to see, smell and hear each other through a protective fence. Howdies allow keepers and our animal behaviorists to observe the hippos’ responses to each other so they can gauge if and when the animals are ready to take the next step. They also give the hippos time to get used to each other before being in the same space.

Once keepers saw that Biko and the girls were interested and calm during howdies, they moved on to introductions, when the hippos share a space. If the hippos start showing behaviors that they’re uncomfortable, keepers can separate them for their safety.

“We chose Zambezi for Biko’s first introduction, because we saw calm and interested behaviors during howdies, and when Zambezi had the choice to sleep next to Biko or Kasai when they were separated overnight, she would consistently choose Biko, and he did the same,” said Carrier. “The first couple of intros were uneventful, which is good. We start most of their intros outside with one hippo in one yard and one in the other and then we open the gate between them. So we don’t surprise them, we always communicate that the gate is going to open and make sure they can see that the gate is opening and there’s another hippo on the other side. They would usually just look up at the gate and then go back to grazing on the grass. Eating is a great sign they’re relaxed and comfortable and calm.”

The team has been doing most introductions in the morning, for about an hour at a time. Carrier says that ideally you would want one hippo to show dominance and the other would be submissive in response.

“He’s just so great,” she said. “When Zambezi wants to boldly enter the yard, he’s respectful of that and backs down to let her know he sees her and respects her presence.”

Because the sisters were separated for some of their vacation away from CMZoo, while Water’s Edge: Africa was being built, the team is also working on reintroducing the sisters to each other.

“We’ve seen that Zambezi and Kasai still get a little territorial with each other, so we’re taking more time with those introductions,” said Carrier. “The exhibit has plenty of space for each hippo to have its own space. Biko and Zambezi don’t always interact during introductions, but are aware of each other. Sometimes, though, they’ll touch noses calmly, which is really cute. We’re super excited.”

Kasai and Biko don’t yet have the positive relationship that Biko and Zambezi share, and Kasai often shows she’d rather not share her space with Biko or Zambezi. For now, the team plans to continue focusing on fostering the relationship between Zambezi and Biko, and working up to helping Kasai feel comfortable sharing space if she shows them she’s interested.

“We’re not rushing anything and always follow the animals’ leads, so they know they’re in control and can be comfortable with these changes, which are a big adjustment for them” said Carrier. “We’re hopeful that once Biko and Zambezi can consistently spend time together that we can introduce Kasai to both of them at the same time, but that could change too. Kasai can be a big personality, so if Zambezi and Biko are good friends, they may be able to gain her respect as a team.”

Biko is also working on his relationships with his animal care team.

“We were lucky enough to get a really cool video of all of his trained behaviors from his previous keeper team, so we’ve been practicing those things so he’s not only fluent in them, but he’s also getting comfortable with us,” said Carrier. “He opens his mouth, backs up and rests his chin on the bars. He knows a ‘steady’ cue, too. When we put a hand on his nose, he will stand totally still, which allows us to give his body condition a good check. He’s an enthusiastic explorer, as most hippos are, so he’ll get scrapes and scratches here and there, and that lets us keep an eye on all of those little wounds. It’s great for a new animal to trust us like that.”

Biko’s team is learning what motivates him to train, so they can expand on his current skillset.

“He loves grain so much,” said Carrier. “The other day he had a mouth full of apples and I showed him his grain, and he spit all of those apples out to eat his grain instead. It was really funny. We normally use produce for training encouragement, but he prefers the grain. Zambezi likes hay and Kasai likes produce, so they’re all different.”

Biko gets about eight pounds of grain per day and half a bale (about 40 pounds) of hay. He also gets produce, including apples, oranges, carrots, melons, and – his favorites – cabbage and lettuce. Out in the yard, he grazes on as much fresh grass as he wants.

Biko is getting more comfortable in his brand-new space, with his new team of adoring keepers.

“He’s getting bolder every day,” said Carrier. “He’s naturally cautious and likes to investigate a space before settling down. The first thing he does is check the perimeter of any space he’s moving into. He likes to mark his territory. It’s a natural behavior of male hippos to spread their feces, which seems pretty gross, but it’s actually quite impressive the way he can reach every corner of a stall we’ve just cleaned top to bottom. He really likes the single stall with the deep pool, which was where he quarantined for a short time when he first joined us. We recently saw him playing with a ball in there, which we loved to see because it means he’s comfortable enough to let his guard down and have a little fun.”

Guests hoping to spot Biko should look for the more slender hippo with pinkish skin on his belly and front of his neck. Kasai is the largest hippo and has pink spots on her feet. Zambezi’s skin is darker and doesn’t have any pink spots.

“There’s something really special about Biko,” said Carrier. “His tusks hang out of his mouth, which is just adorable. He has really long legs for a hippo. He can reach plants and driftwood in the exhibit that we didn’t think he could reach. His head is huge and with those long legs, his body is pretty narrow, so he can reach those beautiful plants our horticulture team worked so hard on to make this exhibit so beautiful.”

Only 30 of the 233 organizations accredited by the AZA in North America house hippos. The last male hippo who lived at Cheyenne Mountain Zoo was Tony, who passed away in 1989. Although our female hippos first came to CMZoo decades ago, this is the first attempt to breed hippos at the Zoo in more than 30 years.