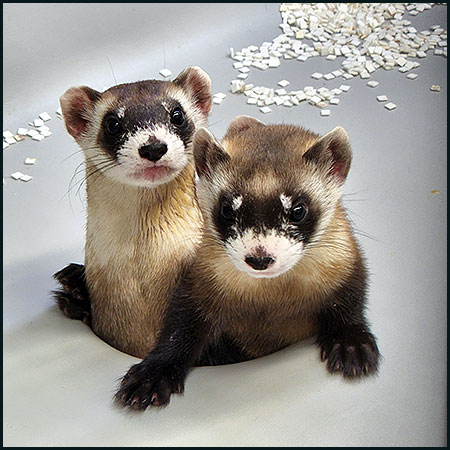 The four black-footed ferret (BFF) kits born in Cheyenne Mountain Zoo’s conservation center this summer are on their way to ‘boot camp,’ a pre-conditioning center where they’ll have the chance to prove they could survive in the wild.

Boot camp puts their survival skills to the test in a contained prairie setting for about 35 days. Biologists monitor the BFFs during boot camp, and if they see any individuals are struggling to hunt, find shelter, or defend themselves, they’ll be returned to human care. Those who prove they could live wild will be released into the prairie beyond the contained boot camp setting, hopefully to breed with other wild ferrets and grow their populations.

It’s a big step for the furry ferrets, who are independent at only four months of age. Their potential wild release represents hope for their species, which was considered extinct when 18 BFFs were accidentally discovered by a sheepdog in Meeteetse, Wyoming in 1981.

From monthly lighting adjustments to reproductive monitoring and only four breeding opportunities (once per year, for four years) to pair a compatible couple to conceive, the intricacies of black-footed ferret breeding success are meticulously managed by the CMZoo conservation team. CMZoo is one of only five zoos in the world participating in breed-and-release programs to support the Black-Footed Ferret Species Survival Plan (SSP), along with the USFWS National Black Footed Ferret Breeding and Conservation Center just outside of Fort Collins, Colo.

Since 1991, CMZoo has bred 589 BFF kits in the behind-the-scenes conservation center, which is designed to keep the ferrets as wild as possible in hopes they’ll one day live on the prairie. Last year, the team welcomed 15 kits to the world, and this year, another four.

“It’s incredibly challenging work and we aren’t always as successful as we want to be, because replicating nature is really hard to do,” said Baughman.

Breeding seasons for males and females are triggered by photoperiod. they won’t breed unless their environments provide the same seasonal changes that would be activated by the changes in natural sunlight that launch that reproductive cycle in the wild.

Male black-footed ferrets start producing more testosterone during the winter months, when there’s less sunlight per day. In the spring, when there’s more sunlight, the females start going into estrous. Males and females have to be in just the right window to breed successfully, and that breeding window only overlaps from March to May each year. On top of that, they’re only typically reproductive from 1 to 4 years old, and they only breed once per year.

Sometimes, even with meticulously managed light cycles, the pairs recommended to breed are out of sync. Under the guidance of the Black-Footed Ferret SSP, conservation teams match potential parent ferrets to maximize genetic diversity, which means pairing recommendations are based solely on the genetics of the potential partners. But, just because they’re a good match genetically doesn’t mean the individuals will breed. Even if the males and females are in sync hormonally to breed, they may not accept their partner.

“This year, we had fewer kits than normal, and that’s a challenge,” said Baughman. “We will look at what we did differently this year, and we will talk to our partners and see if it’s a program-wide shift, or if it was just our facility. Sometimes there’s no clear reason why it was an ‘off’ year.”

Externally, the challenges continue. Bubonic plague is an ongoing battle in the wild. Plague is transmitted by fleas and kills prairie dogs, which black-footed ferrets need to survive. There are also challenges with acquiring and sustaining enough habitat for reintroduction. It’s another reason education is so important. Inspiring people to coexist with prairie dogs and other prairie wildlife is vital to the success of the program. “We believe that connecting our guests to animals at the Zoo can inspire them to protect their wild counterparts, and that isn’t easy to do for a species that is intentionally kept away from guests because they need to stay wild,” said Baughman. “The BFFs are easy to love because of their adorable looks and funny antics, so they have become the ‘poster children’ of the prairie. They do a great job as ambassadors for all species who occupy the prairie ecosystems of Colorado, Wyoming, and the North American Great Plains.”

Although guests can’t visit the breeding BFFs or their kits in the conservation center, they can visit Rouge, a black-footed ferret who lives in The Loft at CMZoo. The Zoo continues working to connect guests to this species that needs local support to recover in the wild.

The team recently participated in the filming of a future episode of Mutual of Omaha’s Wild Kingdom Protecting the Wild, which focuses on the BFF’s struggle and the teams that band together in hopes to save them. That episode is slated to air in 2023. CMZoo will provide updates on an air date as plans continue to come together.

The conservation team also celebrated the 41-year anniversary of the rediscovery of BFFs on Sept. 26 with educational booths at the Zoo. Through social media updates, local news, and other outreach, the team continues to keep the ferrets front-of-mind for animal advocates everywhere. Learn more about BFF conservation.

Every visit to CMZoo is conservation in action. Through CMZoo’s Quarters for Conservation (Q4C) program, by which 75¢ of every admission is dedicated to frontline conservation efforts like this, guests can enjoy a day on the mountain with their favorite animals and support important programs dedicated to saving wildlife and wild places. Since 2008, when Q4C started, CMZoo’s guests and members have contributed more than $4 million to conservation projects worldwide.