May 2022 – In a quiet barn above the Zoo, the ghosts of the prairie are slowly making a comeback. We’ve been celebrating surpassing $4 million raised through our Quarters for Conservation (Q4C) program since 2008, and how our guests and members are making a difference for wildlife and wild places — including for the black-footed ferret! 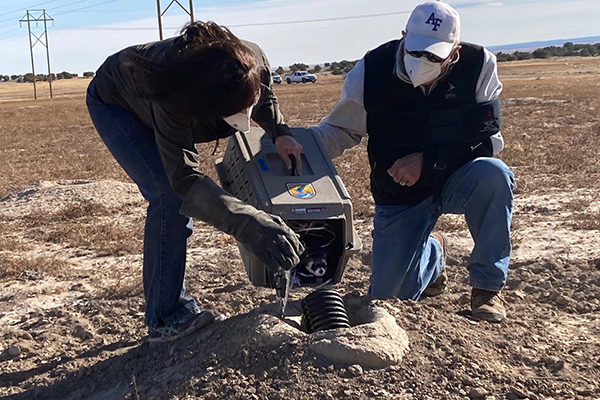 These tiny carnivores once thrived in the grasslands of much of the Midwestern and Rocky Mountain regions of the United States, where they fed on smaller mammals, like prairie dogs. During the 20th century, prairie dog populations fell into rapid decline due to the spread of sylvatic plague and eradication efforts led by ranchers and farmers. As their food sources disappeared, so did black-footed ferrets. They were believed to be extinct in the wild by the 1980s, until a tiny population was discovered by a sheepdog in Wyoming.

Since then, Association of Zoos and Aquariums-accredited zoos, U.S. Fish and Wildlife and other organizations have banded together to breed, release and monitor black-footed ferrets to increase the population. Numbers fluctuate, but recent reports estimate 350 BFFs are now thriving in the wild, thanks to this program.

Q4C funds support annual releases, and recently, CMZoo staff and board members traveled to the ferrets’ wild ranges to release individuals, bred in CMZoo’s in-house conservation barn, into the wild. Our hope is that these and other individuals raised and released by Species Survival Plan-supporting facilities, will continue to restore populations whose presence is vital to a healthy prairie ecosystem.