This summer, Cheyenne Mountain Zoo conservation keepers introduced ten tiny tadpoles to the world. The ‘poster tadpoles’ of their endangered species, the Wyoming toad, morphed into toadlets within weeks. At the end of July, CMZoo fans submitted naming ideas for the ten amphibian siblings on the Zoo’s social media channels, and one theme was a big hit in ‘the office’ at the Zoo. The toads were named Jim, Pam, Michael, Dwight, Stanley, Kelly, Phyllis, Angela, Oscar and Kevin. Since then, they have fine-tuned their hunting skills and are growing big and strong in the conservation center above Cheyenne Mountain Zoo.

In the 90s, Wyoming toads were considered extinct in the wild, and only one population remained in human care. That population became the foundation for a breeding program in nine zoological and governmental facilities, including CMZoo, producing tadpoles and toadlets for reintroduction to the wild.

Over its 26-year commitment to Wyoming toad recovery, CMZoo’s conservation team has released 44,695 tadpoles and 1,510 toads into the wild. Next summer, these ten toads and hundreds of others born at CMZoowill take their first hops into the wild as part of this ongoing conservation effort.

“Each summer, we travel to the Laramie Basin, in Wyoming, to release toads and tadpoles to their wild native habitats,” said Jeff Baughman, field conservation coordinator at CMZoo. “We also prepare toads for breeding in the summer, and we welcome new tadpoles to their tanks. It is a really exciting and busy time, but our winter efforts are also important.”

For the conservation team, winter and spring are all about growing healthy toads and preparing them for the next summer’s release. Of course, educating and inspiring the public to care for toads is a year-round priority.

“Toad conservation may not be front-of-mind for most people mid-winter, but we’re always working to help this native species recover,” said Baughman. “Toads are worth saving. They play a vital role at the center of the prairie environment as the best bug control available and as sustenance for migrating birds and native animals in search of food. If the toads don’t survive, the whole ecosystem suffers.”

Amphibians worldwide are facing mass extinction due to a pandemic caused by the chytrid fungus. Chytrid fungus results in a skin infection that hinders amphibians’ ability to breathe and absorb water. This often leads to organ failure and death. Disinfecting outdoor recreation gear used in and near water can help stop the spread of the deadly chytrid fungus. Outdoorspeople who explore waterways can leave their gear in a hot car or the sun for about 3 hours to kill the fungus and prevent transferring it to another body of water.

In winter, Baughman and his colleagues also continue year-round work on the Wyoming toad Species Survival Plan (SSP). SSP managers make recommendations on which breeding toads should be paired next year to achieve the greatest possible genetic diversity for the population, many of which will be released into the wild and some of which will stay in human care to contribute to continued breeding efforts. 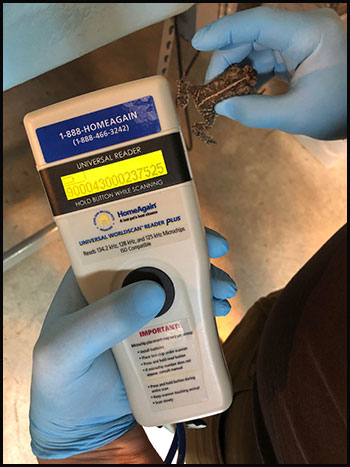 A key to making those breeding recommendations, and giving each toad the best chance at wild survival, is identifying each individual. The team can ID each toad by its unique wart patterns. Since those patterns can change as a toad grows in size, each toad is microchipped.

“By scanning each microchip, we have a more reliable way to track important data for each toad,” said Baughman. “For example, we can see if Michael is gaining weight or if Pam is doing well in artificial hibernation prior to being released, without depending totally on their wart patterns. They get their chips around 6 to 8 months of age. The ten we’ve been following on social media and many others in the cohort recently got theirs.”

In addition to tracking important data while the toads are in human care, the microchips also allow conservation teams to check up on the toads once they’re released. During releases, the teams will scan toads they find in the wild to see how many were bred in human care and released into the wild versus a number of toads without microchips, which biologists can safely assume were either born in the wild or grew from the tadpoles released from human care. 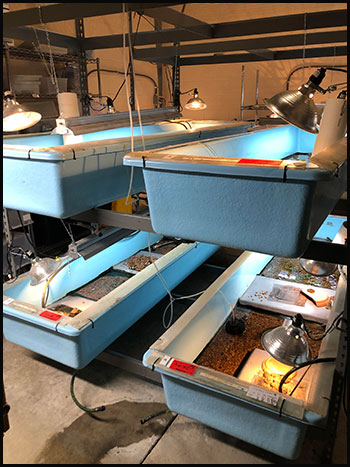 “The goal is to encourage wild breeding,” said Baughman. “It’s not sustainable for us to dream of continuing to release thousands of toads and tadpoles every year f We have to discover what the toads need to breed and survive naturally in the wild.”

So far, age seems to have a lot to do with it. In past years, conservationists focused on releasing ‘headstart toads,’ aptly named for their headstart on life. These toads are released into the wild at one year of age, instead of as tadpoles or toadlets. Their bigger size and self-sufficiency, gained from their first year in a safe environment in human care, meant they were less likely to become fish food. At a year old, the toads are not typically mature and ready to breed so a new strategy will be tested.

“This year, we’re going to start releasing two-year-old headstart toads,” said Baughman. “Conservation is a science, and science is all about experimenting to find better ways of doing things. We think that two-year-old toads might be more likely to breed.”

Because Baughman and his colleagues have seen a small increase in wild Wyoming toad egg strands, they know toads are breeding, but they want to further increase wild breeding events. Rather than completely change their approach to release only two-year-old toads, they will also continue to release one-year-olds, including Jim, Pam, Michael, Dwight, Stanley, Kelly, Phyllis, Angela, Oscar and Kevin, in 2023. We will continue to give updates during the spring as their summer release date approaches.

Just by visiting CMZoo, members and guests are making an impact to help toads and other species. Through CMZoo’s Quarters for Conservation program, 75¢ of every admission is dedicated to frontline conservation efforts like this, so guests can enjoy a day on the mountain with their favorite animals and support important programs dedicated to saving wildlife and wild places. Since 2008, when Q4C started, CMZoo’s guests and members have contributed more than $4 million to conservation projects worldwide.