Cheyenne Mountain Zoo’s Western lowland gorilla troop of five has been working to acclimate to a cohesive living situation since Goma, a 28-year-old silverback, joined CMZoo in May 2016. After years of introductions that have taken longer than keepers anticipated, the tentative success of this summer’s introductions was critical in deciding whether to continue making efforts or to reassess if Goma could ever permanently join the troop.

“We had heard of successful introductions taking longer, but we had also accepted that there is a point at which, if Goma hadn’t adjusted to living with females, we would have to make a decision about whether we’d continue trying,” said Joanna Husby, Primate World animal care manager. “Just in the last three months, we have seen such amazing progress. It’s really rewarding to see them getting more comfortable with each other, which was our goal for this summer.”

The troop’s bonding progress was even more evident when they had to face the unexpected absence of Roxie – one of the two females Goma is most comfortable with in the group, along with Asha. The 43-year-old female became lethargic and refused to eat or drink in early October 2019.

“If Roxie feels under the weather, she’ll skip a meal, just like any of us might. But we know Roxie, and we realized her behavior this time was different,” said Husby. “After a couple of days, we knew we needed to take more aggressive steps to care for her.”

CMZoo veterinary team and keepers immobilized Roxie the morning of October 6. At the CMZoo vet clinic, Roxie’s examination included whole body x-rays and ultrasounds. She was given IV fluids and supportive medications that helped address any infection that may have been present. The examinations revealed multiple medical conditions, the most concerning of which was a suspected infection of Roxie’s reproductive tract. Throughout her life, Roxie has dealt with kidney issues and ulcer-like cysts that have caused gastrointestinal and reproductive system complications. The exam also revealed age-related changes such as arthritis.

While she was under anesthesia, Roxie suffered a cardiac arrest and was brought back to life with CPR and emergency drugs. Vet staff kept Roxie at the clinic, where they could respond immediately if necessary, for a few hours. When Roxie was stable, she returned to a private room near the troop to recover. 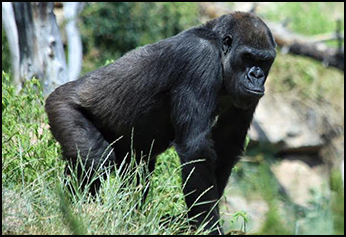 “Roxie has amazed us all,” said Husby. “She really scared us for a second, but she has recovered incredibly well. Within hours of returning to her den, she ate some grapes and drank some juice, which was a big relief.”

Keepers and vet staff checked on Roxie hourly overnight for the first night. The day following the procedure, Roxie was interested in training with her keepers, but she again refused food and drinks. Over the next few days, thanks to keepers’ creative solutions to hydrate Roxie by offering her different juices and foods that interested her, Roxie was able to rejoin the troop and is doing well.

Gorillas are incredibly intelligent and bonded individuals. Although Roxie’s absence could have been detrimental to the progress of the introductions, they have reunited well and continue to make progress.

“The fact that they were separated for about two weeks, during the scare and her recovery, and then had an uneventful reunion speaks to the resilience of their relationship. The female troop members are showing Goma respect by responding calmly to his presence and by following his lead upon moving to different areas of the exhibit,” said Husby. “Goma is still displaying signs of dominance, which is what we want to see. The ladies need to respect him. He’s also showing signs that he’s more comfortable, like lying down near the females and even taking naps. He’s learning that through his calmer demeanor and approach, he’s earning their trust as a leader.”

Summertime in Colorado is the optimal time to work on delicate gorilla introductions, because warmer weather means the gorillas have access to both indoor and outdoor spaces. They have more space to be together, if they want to be, while still having options to be away from each other.

For now, the troop is spending multiple hours per day together. As the weather cools down, and the gorillas don’t have as much access to their outdoor yards, keepers will work to continue providing a balance of time together and time apart for the troop.

“We’re so proud of the ladies and Goma for how much progress they’ve made this summer, even with the potential setback,” said Husby. “We’re looking for ways to continue that progress without regular use of the outdoor yards. Although the procedure with Roxie was very scary, it showed us that they’ve reached a level of comfort and confidence with each other that we hope will continue through the winter months.”

Keepers and vet staff continue to monitor Roxie’s health. We will provide updates as they are available.