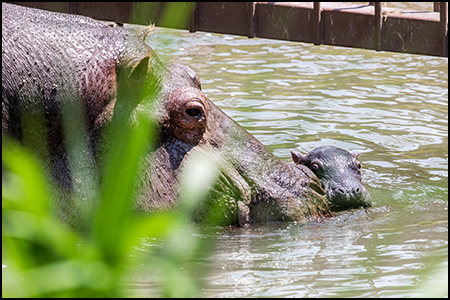 With a final push, a little splash and some adorable baby hippo ear wiggles, 28-year-old Cheyenne Mountain Zoo Nile hippopotamus, Zambezi (zam-BEE-zee), welcomed her first calf on Tues. July 20. At 1:57 p.m., the baby hippo popped up from underwater, bobbed up and down, and swam right over to meet its mom. As long as things continue to go well for Zambezi and her baby, the hippo building will be open and guests can visit them in Water’s Edge: Africa right away. If Zambezi or the baby show signs they need more quiet time, the Zoo will close the area temporarily.

“It was an incredible moment to see this beautiful baby join our family,” said Philip Waugh, lead keeper at Water’s Edge: Africa. “Zambezi’s a first-time mom, but she knew just what to do. As soon as she delivered the calf, she turned around to greet it and started helping it to shallow water. I’m so proud of her.”

The brand-new buoyant bundle of joy is the first hippo born at CMZoo in 32 years. The moment brought eagerly awaiting CMZoo staff members to happy tears as the baby Nile hippo – a species vulnerable to extinction in the wild – made its debut. So far, mom and baby appear to be healthy and bonding well. Staff will continue monitoring the two hippos regularly and won’t separate mom and baby for an exam unless they think it’s medically necessary.

3,200-pound Zambezi is a well-known member of the CMZoo family, famous for her laid-back demeanor and loud hippo ‘laughs.’ She first came to CMZoo from Denver Zoo, in 1993. In June 2020, Biko (BEE-koh), a now 18-year-old long-legged male Nile hippo, joined the CMZoo hippo herd on a breeding recommendation with Zambezi and her sister, Kasai (kuh-SIGH). Biko and Zambezi took a shining to each other nearly immediately. 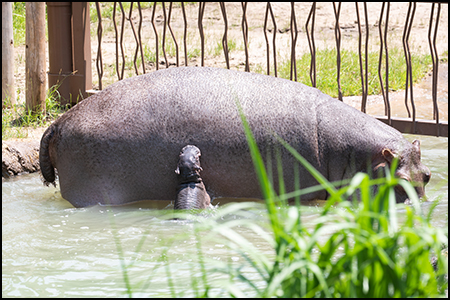 “Like any new couple, their first ‘dates’ had a few awkward moments, but once they connected, it was full-on hippo love,” said Waugh. “The two of them wanted to be together constantly, and we accommodated! They would do a hippo breeding ‘dance’ where they would swim nose-to-rear in a circle. We also saw them taking turns resting their heads on each other’s rear ends for little pool naps. They made it clear they liked each other. We saw their first successful breeding in November.”

Eight months later – a normal full-term gestation for Nile hippos – their little one is finally here. Normal newborn hippos can weigh between 40 and 80 pounds, and this calf appears to be in that range. Because there are no immediate plans to physically check the baby, its sex likely won’t be known for some time. The Zoo will make plans to name the baby after its one-month birthday, following Zoo tradition.

Although Zambezi’s care team was pretty sure she was pregnant, it was scientifically difficult to substantiate, so the team decided to wait and see instead of sharing the pregnancy news. Weight gain is not a reliable way to check for hippo pregnancy, because their daily weight regularly fluctuates by about 100 pounds. Ultimately, Zambezi’s pregnancy tests – including fecal samples and voluntary ultrasounds – were inconclusive. But, there’s no denying it now!

This baby is the fourth member of the hippo herd at CMZoo, and the fourth baby born at Water’s Edge: Africa since April. On April 26, ring-tailed lemur, Rogue, welcomed her first baby. On July 11, Rogue’s sister, Allagash, gave birth to twins. All first-time moms and their offspring are doing great. More about new babies at CMZoo.

(Please note, this video below includes footage of the live birth in the water.)

Water’s Edge: Africa opened in June 2020, with brand-new homes for hippos, African penguins, ring-tailed lemurs, warthogs, pink-backed pelicans and more. Hippo breeding was a key focus of the exhibit’s design, which includes a hippo river loop that can be separated to create mom-and-baby nurseries. Guests can get face-to-face with hippos at their knife-edge pool, or get a bird’s-eye view of them in their yards from a giant rope suspension bridge. The exhibit also has an off-exhibit pool, which can be used if Zambezi’s care team sees she’d like more privacy with her calf.

Only 30 organizations accredited by the Association of Zoos and Aquariums in North America, including Cheyenne Mountain Zoo, house hippos. The International Union for Conservation of Nature (IUCN) Red List categorizes Nile hippopotamuses as a species vulnerable to extinction in the wild, estimating 125,000 to 150,000 remain in their native habitats. The primary threats are habitat loss and illegal and unregulated hunting. Hippos are hunted for their meat and for their ivory canine teeth.

As first-time parents, Biko’s and Zambezi’s offspring represents an important contribution to the population of hippos in human care. The Nile Hippopotamus Species Survival Plan manages the population’s breeding recommendations to achieve the highest possible genetic diversity in the pool. More about Nile hippos at CMZoo.