Colorado’s wildlife and wild places draw millions of visitors to our state every year. We often talk about how to visit Colorado responsibly and how to stay bear aware while exploring the great outdoors. Wild native black bears roam throughout our state, including in many residential and urban settings, so Colorado residents shoulder a lot of the responsibility for keeping bears out of trouble. 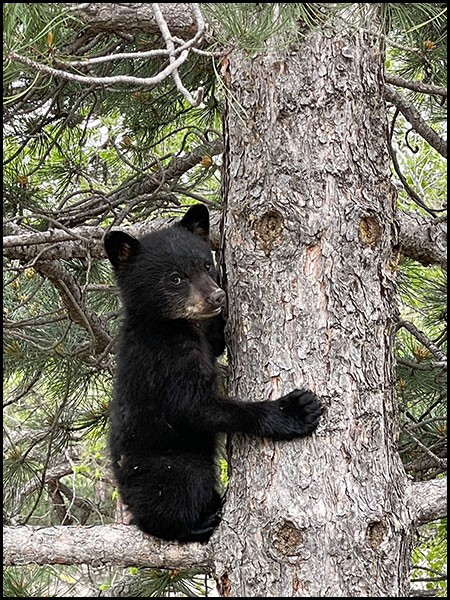 “Our native black bears are super smart, and they are really focused on getting as many calories as possible,” said Courtney Rogers, senior lead keeper in Rocky Mountain Wild. “If they can get food easily, they will – and they won’t understand the long-term consequences. Humans are smart, too, and there are simple things we can do to help bears choose safer, healthier foods.

Every year, Colorado black bears are displaced or euthanized when their foraging leads them to situations that are dangerous for bears and humans. If Colorado Springs residents make an effort to help our local wildlife, we can reduce the number of bear deaths caused by humans.”

Bears’ sense of smell is thought to be the most exceptional in the animal kingdom. A bear’s olfactory bulb – the section of the brain that processes smells – is at least five times bigger than a human’s. A bear’s big nose sets the species apart because all of that room means they have more space for olfactory receptors. Bears have millions of olfactory receptors, more than any other land animal. A bear’s nasal cavity, structured like a honeycomb, is lined with hundreds of muscles to help angle their nostrils in the perfect direction for tracking. They also have a Jacobson’s organ on the roof of their mouth that aids in odor detection.

All of those adaptations combine to give bears a (literally) superhuman sense of smell, thought to be more than 2,000 times more powerful than humans’. Many bear experts have seen proof that black bears can smell odors up to 5 miles away, if the wind is right.

Rogers encourages Colorado residents to refresh their bear-smart daily routines every spring and fall – when bears are most actively searching for food. As fall approaches, bears will soon be entering a cyclical stage called hyperphasia. They know winter is around the corner. They also know they’ll soon have fewer food options. They need to plump up now to live off of their stored fat for the months ahead.

Black bears dine naturally on berries, plants, insects and occasionally on small rodents. But, they can also develop a taste for leftovers. Basically, a bear will follow a yummy smell anywhere. To help bears resist the instinct to roam into dangerous territory, we need to reduce smells that attract bears.

“Bear” the responsibility. Assume you live near bears if you live in Colorado Springs. Many human-bear conflicts occur because people didn’t know they were in bear country, and how to act accordingly. Even east of Interstate 25, bears have been seen roaming in parks and neighborhoods. If you follow these simple steps, you can assume that you haven’t seen a bear in your neighborhood because you’ve been doing a great job helping them avoid the area.

Clean that ‘cue! We’re in the thick of backyard barbecue season, and humans aren’t the only ones who think those cheeseburgers smell delicious. Many a beautiful barbecue has been destroyed by tempted black bears. Do yourself and the bears a favor after cooking outdoors and clean your grill before you go to bed. Use a wire brush to remove food remnants, clean greasy surfaces and trash the grease-catching tin in a bear-safe receptacle.

Bye-bye bird seed. We love native songbirds, hummingbirds and woodpeckers as much as the next nature enthusiast, but bears love birdseed and hummingbird nectar. Offer seed to feathered friends in the morning, but bring those bird feeders in at night. Bears likely won’t approach a busy daytime backyard for birdseed, but they’ll certainly sneak in during the quiet after-hours for a tasty treat. 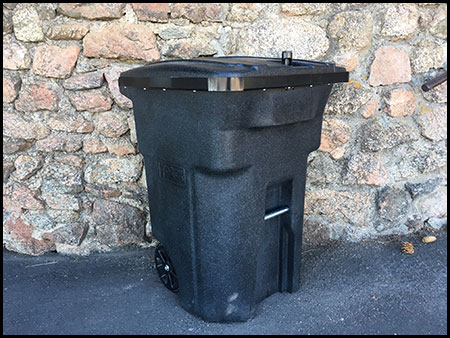 Become a guardian of the garbage. West of Interstate 25, residents are required by law to bring their trash receptacles in at night, or to purchase bear-resistant trash cans. Trash cannot be brought out to the curb until the morning of your scheduled pickup. If you share an apartment dumpster, or access a dumpster where you work, make sure the bear bar is in place when you’re finished (bonus points for bear advocates who make sure others replace the bear bar, too!). If your garbage receptacle smells foul to you, it smells yummy to a bear. Clean your trash receptacles and clean up debris near dumpsters.

Be a bear-friendly backyard farmer. Residential chickens and honeybees are becoming increasingly popular. Can you guess who loves chicken feed and fresh honey? That’s right! Our native black bears. You can still enjoy that mini homestead lifestyle in bear country, with a few extra precautions. Many backyard farmers add effective bear-proof fencing or hotwire around their hives and coops. Your local wildlife agency can also help with other bear hazing techniques. Even if they smell the honey or chicken feed, they will likely move on once they recognize this is no easy treat.

Be a good neighbor. A bear in the ‘burbs won’t necessarily approach human spaces. Many suburban and urban areas have connected open spaces where neighbors adhere to these bear-smart tactics, and nearby bears find plenty of natural bear food. So, if you see a bear taking a walk near your home, be a good neighbor, keep your distance and admire them from afar.

“It’s up to us to save our local bears. It’s truly magical to encounter wildlife as often as we do in Colorado Springs, and with your help, we can all continue to enjoy that,” said Rogers. “It’s pretty simple: if you want to enjoy the benefits of living in bear country, you need to feel accountable for keeping them safe.”