On June 25, our African lion siblings turn six! It’s hard to believe it’s already been that long since the three adorable African lion cubs were born to parents Lomela and Abuto at CMZoo. Since then, they’ve grown gorgeous manes (for the boys), perfected their ground-shaking roars, learned voluntary husbandry behaviors, adjusted their family dynamics, and inspired thousands of people. A lot has changed, but some things – like how feisty Elsa, the only daughter, is – stay the same.

The African lion habitat at CMZoo includes a variety of spaces for the groups to explore separately. When 9-year-old dad, Abuto, almost-14-year-old mom, Lomela, and Elsa are together enjoying the indoor Relaxation Room or off-exhibit maternity yard, brothers Aslan and Boma might be exploring the yard that overlooks African Rift Valley.

When the boys, Boma and Aslan, were about a year-and-a-half old, Abuto told them it was time to go on their own, so the boys formed a coalition of their own. This happens in the wild, and we mimic that social dynamic here at the Zoo. African lions are unique, being the only big cats that typically live in groups in the wild.

Boma and Aslan have a strong relationship and can often be found lounging together at the top of their yard on the large rocks overlooking Colorado Springs.

“These two are really bonded,” said Diana Miller, senior keeper in African Rift Valley, and Boma’s primary trainer. “Boma can be a little guarded over his favorite toys, like half boomer balls that he will carry up to the top bench or put in a corner to keep all for himself.” 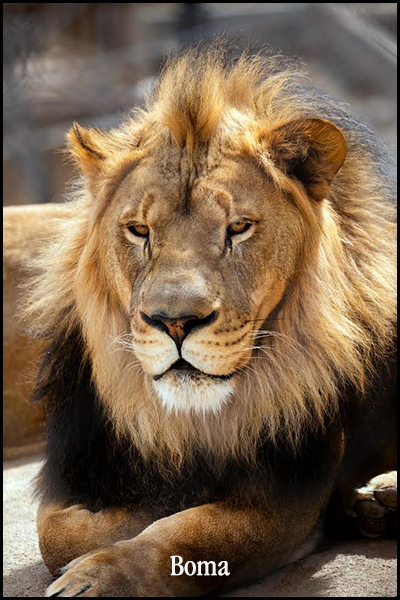 Boma has always been the largest of the siblings, but not always the bravest. He has a few favorite people, like his keepers, who he will greet with a head rub on the fence between them, but generally prefers to watch most activity from a distance. He’s most confident when his brother is nearby.

“He really relies on his brother when it comes to investigating new things in his environment,” said Miller. “He’s curious, but he’s not usually willing to be the first to check things out.”

Although hesitant, Boma is a quick learner and seems to enjoy training. His keepers love to demonstrate Boma’s smarts with a voluntary behavior they call ‘where is your toy?’. This is a physical and mental challenge for Boma, who receives positive reinforcement for interacting with enrichment items on cue. The tricky thing is, each time, the lion needs to interact with something different.

“When we ask him to do this behavior, Boma will slowly approach something in the area, tap it with his paw and come back to us,” said Miller. “It just shows how different each individual is, because we do this same behavior with Abuto, and he will run over and smack things with such enthusiasm. Boma prefers to take his time, and that’s just fine with us.”

Boma weighs in at 470 pounds. He has darker fur, amber colored eyes and more freckles on his nose, compared to Aslan. Aslan has had a crinkly right ear since he was born, which helps many guests tell him apart from his brother. Aslan is slightly smaller, at 440 pounds, and is lighter in color than Boma.

While Boma takes after his dad’s appearances, Aslan’s personality is just like Abuto’s. Because of their laid-back approach to life, Aslan and Abuto do most of the behind-the-scenes encounters with guests. 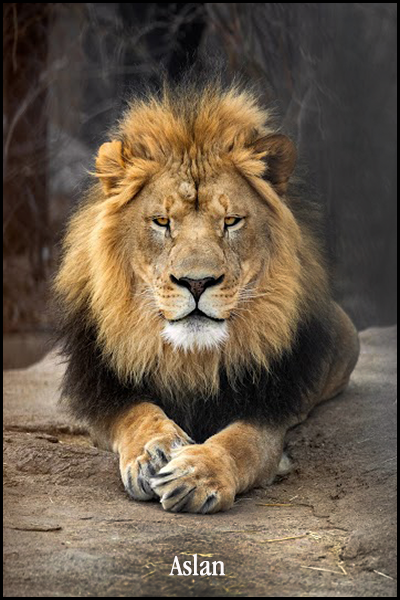 “Aslan is really mellow and vocal,” said Kayla Ringuette, African Rift Valley keeper and Aslan’s primary trainer. “He makes little baby noises when he trains, just like he did when he was a cub and we started working together. He was such a sweet-natured and curious cub. Aslan still likes to interact with his keepers and guests, but as an adult, he’s also confident lounging on his heated floors in the mornings. He’ll come over and greet us on his own timeline, rather than rushing over like he did as a cub.”

He’s also the goofiest of the bunch, according to his keepers. But, he’s quite the scholar when it comes to training. Aslan is trained for a voluntary ‘drink’ and blood draw behaviors, just like his dad.

“Abuto has kidney issues, so we keep a close eye on the boys and train them proactively so that if we need to help them, it’s a behavior they’re comfortable with,” said Ringette. “He also gives blood voluntarily, like Abuto, so we can monitor his blood values. These behaviors will be really helpful if Aslan ever develops any kidney problems, which are unfortunately relatively common in big cats.”

Aslan’s favorite enrichment is the huge, 55-gallon barrels that keepers place throughout the lions’ yards and indoor spaces. Guests can get an idea of how powerful the lions are by witnessing the damage they can do to the incredibly thick barrels.

“He loves dragging all of the barrels into one spot in a den or in the ‘cave’ in the big yard,” said Ringuette. “The barrels seem like fun for him, but they also allow him to mimic the natural behaviors of dragging a meal home as he would in the wild. That sort of enrichment helps keep him physically and mentally stimulated, along with training and other activities.” 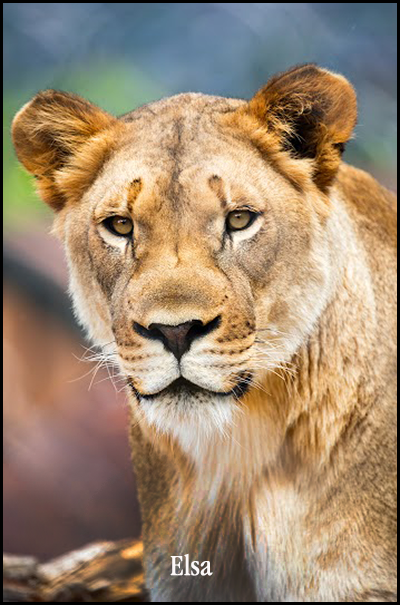 Elsa may be the smallest of the siblings, but keepers say she’s the feistiest. Even at just a few months old, when she still lived with her brothers, she would push right past them to get to food. Now, she lives in a pride with her mom and dad, and has a very bonded relationship with them. At 340 pounds, the only daughter of the pride weighs 200 pounds less than Abuto, but still takes every chance she can to wrestle with him.

“She loves to play more than any of the other lions, and we frequently see her initiating play with Abuto and Lomela,” said Rachael Hahn, senior keeper in African Rift Valley and Elsa’s primary trainer. “If she sees her brothers in a separate space, she’ll duck behind something and pop back up like she’s playing ‘peek-a-boo,’ and Boma will sometimes play along.”

A true lioness, Elsa likes to hunt. Hahn says one of her favorite behaviors to see Elsa do is called ‘attack the buffalo.’ This behavior, which involves a water buffalo statue in their main yard, is another way to encourage the lions to exercise their natural strengths while demonstrating their impressive agility and power to guests.

“When Elsa gets her ‘buffalo’ training cue, she will run over to the statue, jump onto it and grab the buffalo’s back, just as hunting lions do in the wild,” said Hahn. “The buffalo’s back is about four feet from the ground, so the leap itself is really impressive. It keeps her agile and active, and hopefully helps our guests fall in love with lions, so they can help us protect them in the wild.”

In March 2021, members voted to fund a pet vaccination program, called Kura’s Pride, managed by our long-time conservation partner, Ewaso Lions, based in northern Kenya. These vaccines can help prevent life threatening diseases, like rabies and distemper, from being transmitted from pet dogs and cats to wild carnivores, like African lions, that live in the area. The team has administered more than 800 vaccines since starting the outreach program a month after the member vote. CMZoo funding provided local communities with trained personnel, vehicles, veterinary equipment, and materials to make collars used to identify vaccinated dogs and cats.