Generous donors have contributed $12 million to Cheyenne Mountain Zoo’s next capital campaign, which seeks to support a variety of Zoo improvements. 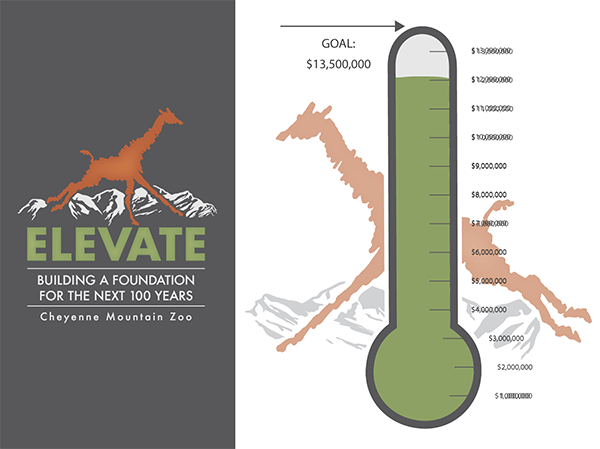 “We’re excited to announce our next capital campaign, called ‘ELEVATE,’” said Kelley Parker, director of development at Cheyenne Mountain Zoo. “Unlike previous capital campaigns, which typically focus on improvements for one exhibit or zone of the Zoo, this campaign seeks to further elevate our animal care standards and guests’ experiences throughout the Zoo.”

ELEVATE’s fundraising goal is $13.5 million. Thanks to private donations, the Zoo is just $1.5 million shy of that goal. Now, the Zoo is inviting the public to contribute.

CMZoo is a nonprofit organization and one of very few zoos accredited by the Association of Zoos and Aquariums in the country that does not receive tax support. The support of the Colorado Springs community is vital to the Zoo’s continued ability to upgrade facilities.

Cheyenne Mountain Zoo has been consistently named one of the top 10 zoos in North America by USA TODAY’s 10Best Readers’ Choice Awards and TripAdvisor. The Zoo is known for its top-notch animal care, incredible up-close animal experiences, leading conservation practices, educational programs, and natural setting on the side of Cheyenne Mountain. As CMZoo approaches its 100th year, in 2026, ELEVATE’s ambitious goals will solidify a foundation for the next 100 years.

“Thanks to our dedicated private donors, we are very close to meeting our fundraising goal,” said Parker. “And we know we can meet that goal with the help of our community. A donation to ELEVATE means you’re contributing to the next hundred years of elevated animal care, conservation and guest experiences at Cheyenne Mountain Zoo.”

ELEVATE aims to support a variety of Zoo focuses:

To learn more about the ELEVATE capital campaign and to make a contribution, please visit cmzoo.org/elevate.