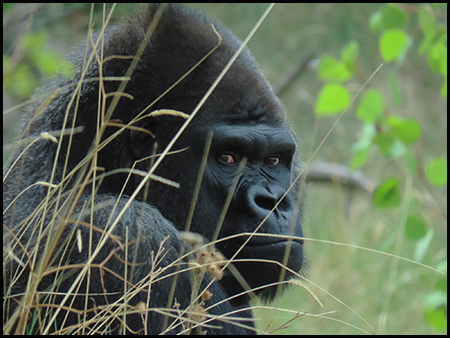 Last month, Juju, 40-year-old CMZoo female Western lowland gorilla, started showing her keepers she wasn’t feeling well. Juju, who is known for being confident and independent, was spending more time away from the group, being less energetic, and sitting uncomfortably. Juju is in her golden years, having surpassed the median life expectancy of 39 years for female Western lowland gorillas, and had experienced short periods of similar discomfort, but this episode was lasting longer and her symptoms were more severe.

On August 4, 2021, after her team had exhausted all voluntary diagnostic and treatment options, Juju received a thorough examination under anesthesia in CMZoo’s vet clinic. Anesthesia is risky for any animal, but especially for an older animal. X-rays showed she doesn’t have major issues, like fractures or breaks, causing her pain, and that it’s more chronic, age-related issues to manage. She did well under anesthesia and has recovered and responded well to the treatments, including steroid injections in her left knee and left hip, and ongoing oral medications to help with pain and inflammation. Thankfully, Juju’s keepers and veterinary team have seen her continue to improve physically since the treatment.

Unless Juju’s care team sees that she’s declining, they’ll continue to manager her discomfort with oral medications, and won’t attempt any further diagnostics. They track her quality-of-life markers for her ‘new normal,’ which help the team set realistic expectations and more specific behavior trends that help them identify if she might need assistance again.

Some might think Juju’s care plan is purely focused on her physical conditions, but there’s another factor to consider when an animal has to leave and rejoin its group: the well-being of the troop. Because gorillas are such social beings, and because CMZoo’s Western lowland gorilla troop of five has been somewhat slow to form a cohesive group, the next step was to reunite them while preserving the relationships they’ve worked so hard to establish.

Silverback gorillas joining an established group, like 30-year-old Goma, have to earn the respect of the females in their troops, and a large-and-in-charge female like Juju doesn’t always make it easy for him. Under normal circumstances, it wouldn’t be unusual for Juju to ‘challenge’ Goma, testing her limits by sitting closer than he would prefer, for example. When Juju does this, Goma’s job is to prove he’s a leader to earn her and the other females’ respect. He might ‘display,’ by standing up tall and making noise with nearby objects. Normally Juju would show him respect by moving away. While she wasn’t as mobile as usual, Goma – knowing Juju’s tendencies – could have seen her inability to move away quickly as a continued challenge, which could have caused tension between them. To avoid creating this environment, which would be stressful for the whole troop, keepers gave Goma his own space. Other than during her time at the vet clinic, Juju was with the females consistently. 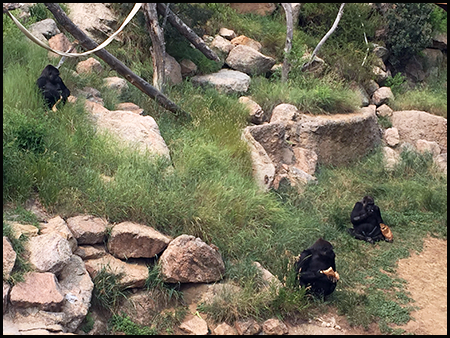 “Once our vet team decided Juju was steady enough, she rejoined the girls,” said Eleanor Knox, senior keeper in Primate World. “When we opened the door between them, she was still pretty stiff from the procedure. Roxie and Asha were doing happy gorilla grumbles and touching her. Roxie, her best friend, patted her. Asha sort of encouraged her out of the den to a comfy hay bed, where she relaxed for the next couple of hours with Roxie close by.”

By the next morning, Juju had made her way outside, followed by Roxie. The team gave Juju about a week after the immobilization before reuniting her and the females with Goma. After a week, they could see the ladies were calm and settled, and Juju was confident and mobile enough to share space with him.

“The goal is to have a cohesive group, so separating Goma was the best thing for them at the time, but we knew we would need them to reunite when Juju was better,” said Knox. “It didn’t take long to see we could reunite everyone safely.”

When gorillas are excited or happy, they let out ‘gorilla grumbles,’ and the day they were reunited was grumbly indeed. They’ve been back together for their normal daily interactions for about two weeks.

“Just seeing that they could go through this potentially stressful scenario so calmly, and actually seeing excitement during the reunion is a huge nod to their resilience and bonds as a group,” said Knox. “Goma has been paying a lot of attention, which we can interpret as him caring about the overall good of the group.”

Primate World keepers will continue to monitor Juju and adjust treatments as needed. For now, the troop has settled back in together so well, that they’ll continue spending time together as a troop, growing their bonds.