May 2022 – When you visit Kimba at CMZoo, you’re protecting Lugard in Kenya. That’s because wild African elephants receive help from our Quarters for Conservation (Q4C) program! Since the program began in 2008, guests and members have contributed more than $4 million to support CMZoo’s conservation partners around the world, who fight to save species like African elephants and rhinos. 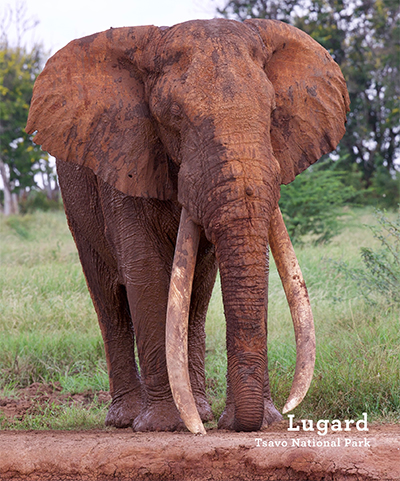 Lugard [loo-GUARD] spends his days peacefully foraging on the protected lands in Southern Kenya’s Tsavo National Park. CMZoo’s elephant conservation partner, Tsavo Trust, is a field-based non-profit there that uses aerial surveillance and on-the-ground field efforts to protect wildlife, including the last of the Big Tuskers, like Lugard.
A Big Tusker is any elephant whose tusks touch the ground. Lugard is believed to carry one of the biggest sets of ivory in the world, which unfortunately makes him a target for ivory poachers. There are only about 25 Big Tuskers left in the entire world, and most reside in Tsavo Conservation Area, where our partners keep watch over them, including the magnificent Lugard.

Lugard, who is estimated to be 50-to-55 years old, is described as a calm and private individual who seems to enjoy taking life at his own pace. When the ground teams encounter Lugard during their patrols, they say he seems relaxed and comfortable, almost as if he instinctively knows they are here to help him.

By visiting CMZoo, you’re sending financial support directly to the team who keeps a watchful eye on Lugard, protecting him from anyone who might seek to harm him. Tsavo Trust has a small plane to watch from above, and teams to respond on the ground. They get support from Kenyan Wildlife Service, to make arrests, respond to injured animals, remove hundreds of snares (traps) every year, and help local communities thrive alongside elephants.