May 2022 – When you place your token in the Wyoming toad Q4C kiosk, you are supporting a program that has released over 41,629 Wyoming toad tadpoles, 293 metamorphs, and 1151 overwintered adults back into the wild since its inception in 1992. 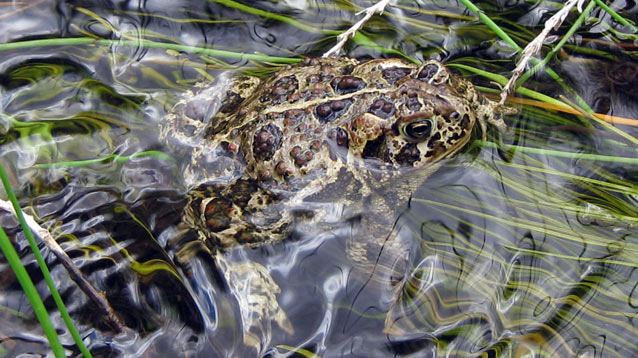 These tiny toads have a major role in their native prairie ecosystem. As an indicator species, these amphibians reflect the health of their surroundings and the other species that share their habitat. When Wyoming toad populations begin to fall ill, this is often an indication of a larger issue plaguing their ecosystem.

The amphibians also play a critical role at the center of the region’s food chain. The toads feed many middle-level predators like fish, birds and mammals, while controlling insect populations. When they exit the food chain, their predators are left without a vital food source, and insect populations, left unchecked, can surge to unhealthy levels.

Funds from members and guests, through our Quarters for Conservation program, have contributed not only to the reintroduction of these animals, but also advancements in breeding research for the species. This research has lead to improvements in the overall health of the toads, which has increased their chances of surviving and breeding in the wild. Thanks to members and guests, Wyoming toads are once again getting a fighting chance in the wild.

Thanks to CMZoo guests and members, we have raised $4 million for conservation projects around the world since the Quarters for Conservation program began in 2008 and we’ve been celebrating our $4 million milestone!

Where Off Exhibit - Conservation Barn

From tadpoles to toadlets – June 28! – We’re taking you on a wild adventure, following ten little Wyoming toad tadpoles as they grow up in our conservation center (off exhibit) before they help restore their endangered species in the wild. Be mesmerized by metamorphosis, as they grow legs and absorb their tails, earning the title of toadlet. Root for them as they learn to hunt and grow into dime-sized defenders of their species. Then, follow along as they go through the year-long preparation for their eventual wild release in June 2023. Follow our Facebook playlist “A Year in the Life of a Wyoming Toad” here https://www.facebook.com/watch/55670076018/372013218132634/.